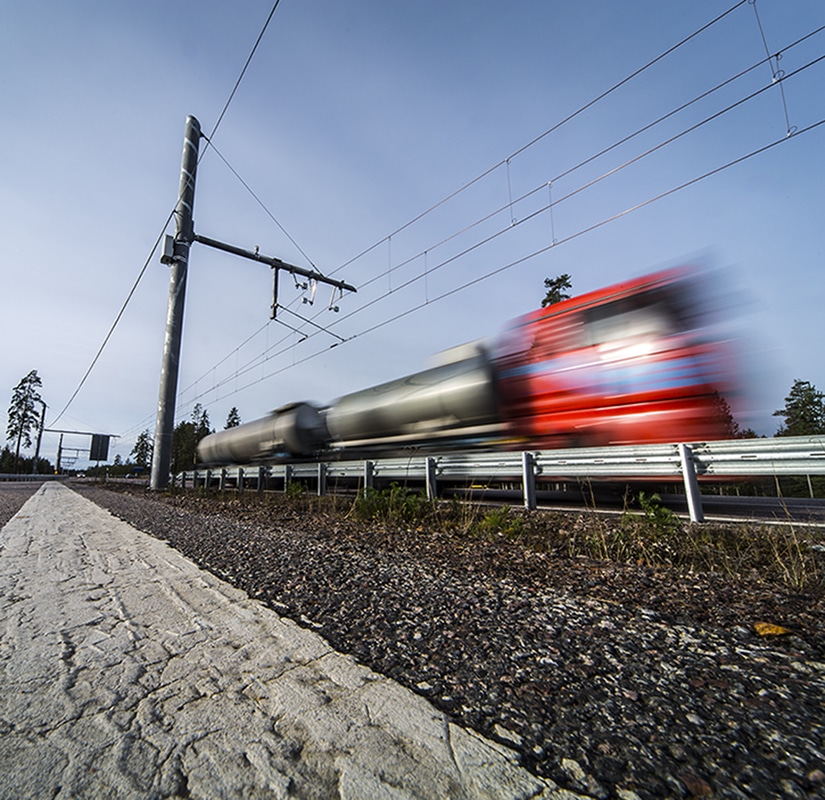 The electric road speeds up creativity – and business

The world’s first electrified road, Elväg E16, is now located just outside Sandviken in Sweden. If everything goes well, it may be extended into Dalarna. An experiment that attracts both domestic and foreign visitors.

On the current section of the road, poles carrying the power lines have been placed at intervals of sixty meters. The poles are protected by a railing. The system is automatic, but during the demonstration periods, one week a month, the plant is manned. The resting place next to the test section is also equipped with an electric loop for testing the start and stop of the truck. Right now it is a hybrid truck that travels the route, and another spring will come.

Behind the project is the Swedish Transport Administration, which wants to investigate whether it is possible to replace parts of heavy vehicle traffic with climate-friendly alternatives. To obtain a decision basis a two-kilometre long demonstration section has been built between Sandviken and Kungsgården in Sweden.

The reason why the electric road ended up right here is about the traffic environment, but also about the weather conditions and the topography.

The industry will be the driving force in the electric road. The goal is to create profits for the transport companies who choose to run it in the future. Electricity is cheaper than diesel so the hauliers will be able to sell more affordable transport, while CO2 emissions will decrease substantially. The Gävleborg Region’s role is to create the conditions for regional development, growth and quality of life.

As for the posts, they could also be used for other purposes. For example, they could mount lighting and sensors that facilitate traffic management, weather observations or communication on them. A lot of research and development is going on in parallel.

Many visitors have shown interest and also internationally. Visitors come from countries such as Germany, the Netherlands, Hungary and Korea, in addition to the Nordic neighbours. Several committed companies have also been involved in the project, both transport buyers and suppliers, who are building up expertise in this area.

Anders Sundvall at Green Business Region says that the organization is working on organizing and arranging Technical Visits for foreign visitors who want to see and learn more about Swedish environmental technology, in this case, the electric road.

– We are part of a national collaboration to attract foreign stakeholders of environmental technology solutions to visit Sweden.

“The world’s first” and “the world’s largest” are often epithets that attract companies and authorities whose task is to work with green and smart technology solutions.

– In the end, the foreign visits are meant to lead to business, says Anders Sundvall.

It is a prerequisite for different actors to work together to succeed.

– We, in the Gävleborg region, obviously want to do what we can to contribute to development by receiving visitors who are interested in green technology, says Helena Fahlstedt.